My account
Close
You are here: Home » PEPTIDE THERAPY » What are Peptide Bioregulators

What are peptide bioregulators 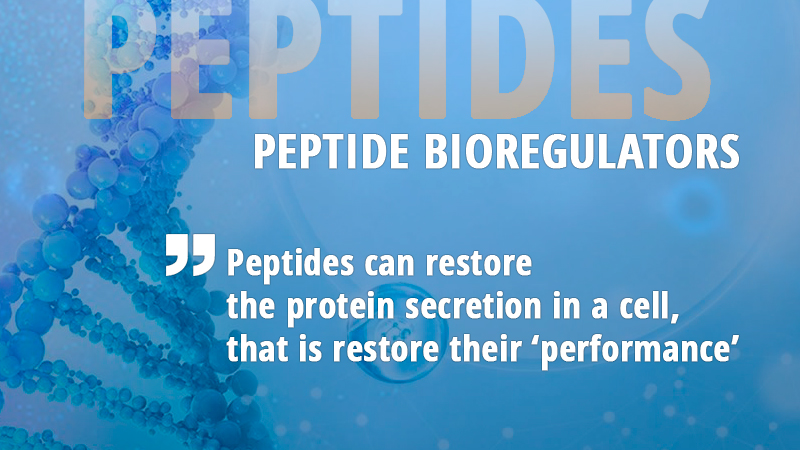 The aging mechanism is an evolutionary predetermined process. According to the UN data the number of elderly and old people constantly increases worldwide, both in absolute numbers and percentage wise too. This will inevitably lead to complication and constraints on the public health and social issues. The global aging process, in terms of evolution, makes it necessary to search for new adequate ways to increase the period of working life, slow down the processes of premature aging and prevent age-related diseases.

Recently, a very important discovery in the field of biology and medicine has been made. It has been discovered that different vital resources of the human organism can be increased by 20 - 42%. This discovery occurred thanks to a new group of peptide signalling molecules. These peptides epigenetically regulate gene expression, protein synthesis and the functions of the organs. Peptides decrease tumour incidence and increase average lifespan in experimental animal studies. Administration of peptide preparations has also shown to normalize the main functions of the human organism, as well as decrease the aging pace and mortality .

During the period 1973 - 2014 professor V. Kh. Khavinson extracted over 20 complexes of physiologically active peptides from various organs , as well as 17 others synthesized from amino acids, (di-, tri-, tetrapeptides), all being covered by patents in many countries including the USA, Canada, Australia, Europe, Japan, Korea, Israel, etc.

Peptide bioregulators are fractions of proteins, the molecules of which are short chains (only 2-4 units) of amino acids. Initially, such peptides were isolated from the organs and tissues of animals, and then synthesized.

Proteins, the main building material of the body, regulate most of its vital functions including the aging process. Over the years, the synthesis of proteins in cells as well as in a diseased state or under the influence of damaging factors is reduced. Peptides can restore the protein secretion in a cell, i.e. restore their 'performance'.

Peptides regulate the gene activity by complementary binding to a specific DNA region (this interaction plays a key role in a number of fundamental processes for storing and transmitting the genetic information). Due to this binding, they regulate the spatial form (conformation) of DNA and gene expression, and contribute to the stimulation of protein synthesis. That means a cell begins to work as in a young and healthy body.

Thus, short biologically active peptides are essential tissue-specific modulators of gene expression and the modulators of DNA methylation in many cases. This means that short peptides can be used as effective epigenetic regulatory signalling molecules that affect gene functioning and cell differentiation. The molecular mechanisms of the regulatory action of short peptides have not been insufficiently researched. However, there is evidence that peptides can interact specifically with DNA and recognise the methylation status.

On that basis, a hypothesis has been proposed that peptides, in interacting (binding) with the methylated promoter DNA sites, can prevent the action of methyl transferase DNA, leaving these sites unmethylated, which is in most cases obligatory for gene expression. This is one of the possible mechanisms of transcription regulation with peptides. The obtained findings that short peptides can reduce the level of promoter methylation fall within the framework of the proposed hypothesis about the mechanisms of transcription regulation with short peptides.

Scientific evidence based on 30 years of experience of the use of peptide drugs in neurology, therapy, ophthalmology and other medical disciplines show the high effectiveness of this group of pharmacopoeial drugs. Over the past 15 years, the active scientific work of researchers, physicians and pharmacologists of the Russian Federation and the CIS countries has contributed to further introduction of peptides into a daily practice of neurologists, ophthalmologists, surgeons, neurosurgeons, therapists and physicians from other fields.

Products and biotechnologies created due to their high efficacy are currently being used in industrial and military sectors as well as in space medicine. Peptide based medications were used in the complex treatment of people who suffered during earthquakes, accidents at nuclear submarines and in Chernobyl nuclear power plant accident. Further study of the effectiveness of these bioregulators on humans has clearly shown the ability of these drugs to increase the life resource of human body and to significantly reduce mortality among patients (over a 15 years long study period).

Treatment and Rehabilitation of Khavinson's Peptides